Skip to content
HomeLAMBETHWATCH – YOUR CHANCE TO LET LAMBETH HAVE YOUR VIEWS!!!! (PLUS!!!! LAMBETH WANT TO BE LONDON BOROUGH OF CULTURE!!!!! ETC ETC) 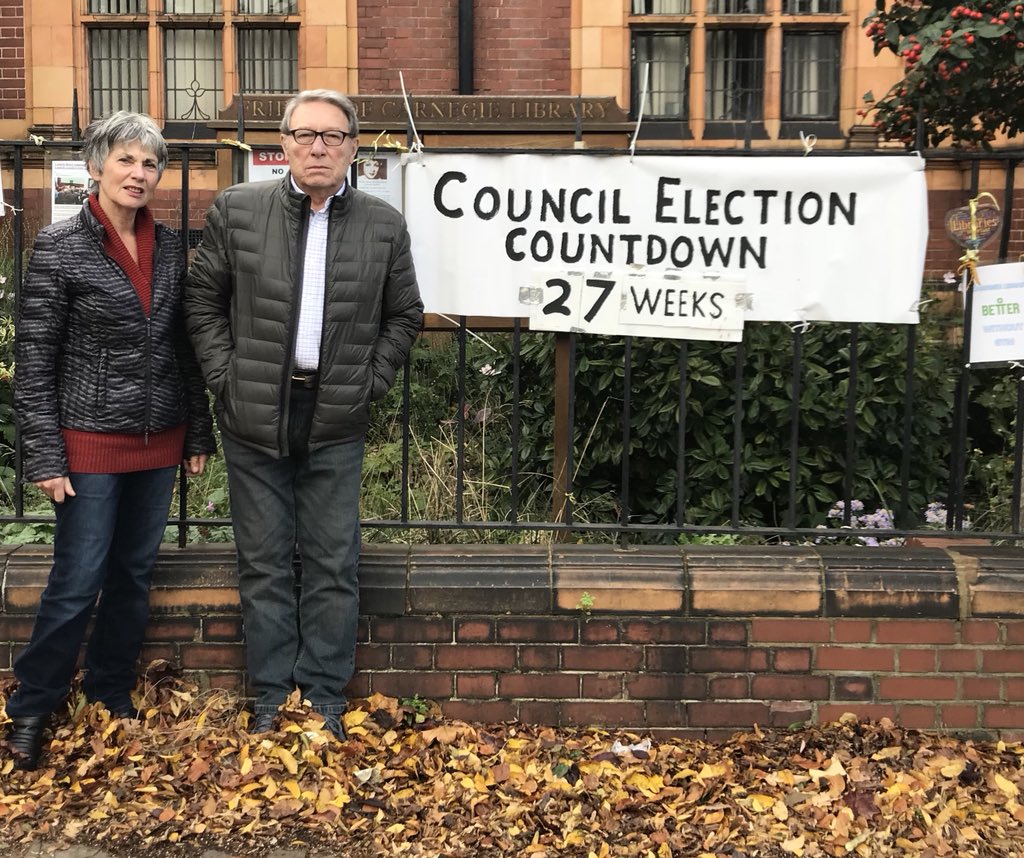 Defend The Ten‏ @defendtheten Tweeted: Election countdown week 27 & we meet Liz & Edward (80). Edward fled the Soviet Union in 1973; he later ran Carnegie lib chess club for 16 yrs. Remarkably, Edward continued to run the club from the steps of @CarnegieLib even after it had shut, a testament to his strength of feeling. The club went on to have over 100 members, with some going on to play in the national chess team…
Helen‏ @jhgm50  added: As a survivor of the Battle of Stalingrad Edward is very resilient. Council please take note: here is one tough opponent.

LAMBETHWATCH – YOUR CHANCE TO LET LAMBETH HAVE YOUR VIEWS!!!!

Lambeth’s detractors need to say what they would do if they were running Lambeth council.

That was the challenge thrown down by one of the council’s two deputy leaders, Cllr Paul McGlone at Thursday night’s council meeting.

“They need to be honest and come forward and say what they will do” he said.

So here’s your chance. Send your ideas by post to Cllr McGlone c/o London Borough Of Lambeth P.O. Box 734  Winchester  S023 5DG (That’s not a joke – that’s the address on the council’s official website).

Or you can deliver them by hand to Brixton Customer Centre, Olive Morris House, 18 Brixton Hill, London SW2 1RD just up the road from Lambeth town hall.

Or email him at:  pmcglone@lambeth.gov.uk

(Please feel free to send us a copy of your ideas. And if you get a reply feel free to let us know as well. Thanks. Ed.)

LAMBETH WANT TO BE LONDON BOROUGH OF CULTURE

Lambeth’s plans to bid to become a London borough of culture in 2019 or 2020 have, predictably, been met with a wave of derision on social media. (Croydon, Lewisham and Southwark are among other London boroughs making similar bids.)

Lambeth’s spin: “We need your ideas. “On 1st December, Lambeth will submit a bid to the Mayor of London, competing for the London borough of Culture title for 2019 or 2020.

“Lambeth’s bid will celebrate the borough’s proud history of alternative and original thought. “It will also look to the future, using culture to inspire and tackle the major social challenges faced by Lambeth and London today.

“By submitting an idea, you can help to shape a remarkable London Borough of Culture bid that will benefit communities across the borough. “Let’s create a future that’s inspired by our roots and driven by our imaginations.”

Defend The Ten Retweeted Looletea‏ @Looletea: Re-opening Minet and Carnegie would do a lot more for Lambeth’s culture.

Defend The Ten: How can Lambeth be a borough of culture while cutting libraries (mentioned at least twice in the picture) to Victorian-era levels?

Alison Gibbs‏ @guineagibbs Only cultural vandals would do what you’ve done to Carnegie Library.

As we said at the beginning, the move has been met with a wave of derision on social media.

The first two comments supporting the move on Love Lambeth (the council’s official website) are:

Both of whom are….Lambeth Labour councillors.

FROM THE COUNCIL MEETING

Tributes were paid to Lambeth chief executive Sean Harriss, who is standing down because of ill health.

Conservative opposition leader Cllr Tim Briggs said: “He was very likeable. “His door was always open. “One of the things that was notable was that I never had any ideas what his political views were – which is a great tribute to him.”

Green party Cllr Scott Ainslie, also passing on his best to Sean Harriss, said: “What we need is a good strong set of hands.” The financial mismanagement uncovered by the Peoples Audit…. (jeers from Labour councillors) …..and the peer review needed to be sorted out, he said.

When did the council expect to appoint a permanent replacement? he asked.

Council leader Cllr Lib Peck said she echoed the initial comments of both Cllr Briggs and Cllr Ainslie and wished Sean Harriss a “speedy recovery.” They would be starting a search for a “permanent recruitment” very soon, she added.

“IT IS INHUMAN TO USE A LEGAL LOOPHOLE TO DEPRIVE RESIDENTS OF THEIR PROPERTY RIGHTS. “WE WOULD END THIS” – CONSERVATIVE OPPOSITION LEADER OUTLINES PLANS FOR NEXT MAY’S COUNCIL ELECTIONS

In his opposition statement, Conservative group leader Cllr Tim Briggs said he wanted to look at ongoing issues that remain critical for Lambeth residents, running up to their decision about who to vote for next year on Lambeth council.

“The first is the closure of libraries by Labour councillors, and turning them into unwanted gyms. “We believe in libraries: they help foster communities, and help people on low incomes to do better. “The survivors have deserved a better negotiating process.

“The second is the Shirley Oaks settlement. “After the disaster of the last council meeting, the Conservative opposition councillors are losing faith in Cllr Peck to negotiate a deal. “We will keep monitoring the discussions.

“The third is children’s services. “The letter from OFSTED in July affirmed that the issues have not gone away. “From speaking to council officers at the council’s corporate committee we are optimistic that they can start to end this catastrophe under Labour, and protect our children.

“The fourth is Labour councillors’ inability to get to grips with the council’s finances. “Like the best-run Conservative councils, we need to get away from a reliance on central government funding.

“Conservative councillors have suggested a centralised system for contracts with suppliers, which would end waste, fraud, and the potential for corruption, and allow more money to be spent on services, especially for the most vulnerable.

“It is inhuman to use a legal loophole to deprive residents of their property rights. “We would end this.

“In my experience, leaseholders and tenants are abused and ripped off. “You can have as many surveys done as you like saying repairs and billing for major works are both improving. “My email inbox says otherwise.

“Finally, Conservative councillors and activists in different wards have checked the fire safety assessments which show, Labour councillors say, that people are safe in their homes.

“But in the three wards we checked so far, an average of 88 per cent of urgent recommendations to improve fire safety had not been carried out. “This is a scandal” he declared, repeating his assertion that the worst rogue landlords in Lambeth are the Labour councillors running Lambeth council.

“Our Right-to-Part-Buy scheme, similar to the one in Labour-run Barking and Dagenham, would raise enough money to repair all of our estates that have been so neglected under Labour, and give tenants more opportunity to own their own homes.

“I urge residents to think carefully about whether they want to return these Labour councillors to power next May.”

But here’s the twist:

This must have caused absolute apoplexy and disbelief among Lambeth Labour councillors and whoever’s running the council.

Of course those in charge can’t kick her out of the Labour party because she’s now an MP in neighbouring Wandsworth.

(New readers should be aware that apparently no-one from the Momentum side of Lambeth Labour was allowed to put themselves forward for the Labour candidates list for the Gipsy Hill by-election.

And there have been continued allegations on social media that anyone who signed any of the Lambeth libraries petitions had their name removed from the list of potential Labour candidates for next May’s Lambeth council elections.)

The Lambeth Momentum element must be laughing themselves silly.

The Mayor of Lambeth Cllr  Marcia Cameron issued a warning to all councillors at the meeting.

She “reminded members from all sides to be respectful of the chair, not speaking over each other or myself.

“If I instruct you to be seated or cease from speaking you should abide. “Not to do so will result in repercussions.”

Someone among the councillors made a brief inaudible comment – possibly: “repercussions?” -to which the Mayor replied: “Yes – that’s right” (Laughter from councillors).

A deputation from Clapham (apparently local Conservatives) addressed the meeting on speed limits in their area. They began by asking how many prosecutions Lambeth council have undertaken against motorists for breaking the 20mph speed limit.

Cllr Jennifer Brathwaite, cabinet member for housing and environment, avoided answering the question. But later she was keen to emphasise that fly-tipping in Lambeth has dropped by 32 per cent from September 2016 to September 2017.