Lambeth is a self proclaimed “co-operative council”. It’s crazy that it takes an FOI request to obtain basic information and it’s not simply publicly published.

To which Tom Keene (Resident of Cressingham Gardens estate in Tulse Hill which is facing demolition thanks to Lambeth Labour councillors) responded:

Great morning thanks. Did you hear lots about Lambeth council – Estate demolitions? Lending £300m to a private company with no financial detail “paid back in due course”? Decommissioned libraries? Suspension of labour councillors if they speak up for residents?https://twitter.com/louiesomerville/status/957616704946761731 …

We’ve hit 1000 followers on Facebook: you can follow us at https://www.facebook.com/lambethlabour/ . Special congratulations to our 1000th follower, Lambeth Tory leader Tim Briggs! #ForTheMany

….AND THIRTEEN WEEKS TO GO…… 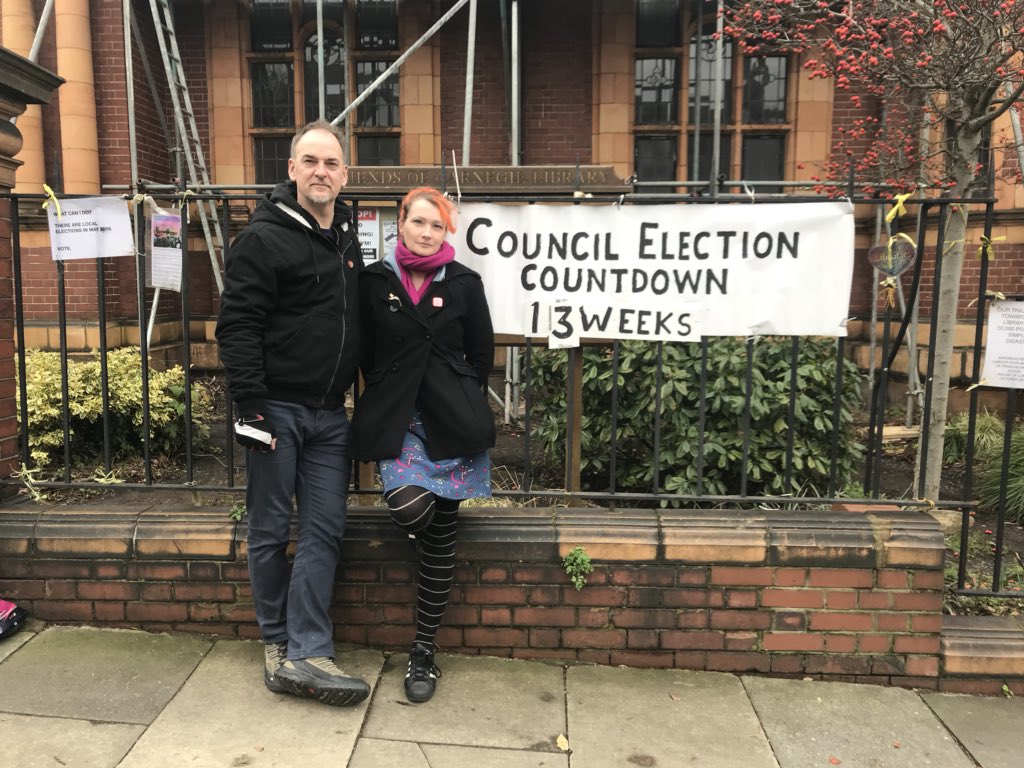 13 wks till the Council Elections & here’s Lisa and Matt. Of losing Carnegie Library Lisa says: “it’s a double whammy. “Not only have we lost a wonderful library service but also the peace & quiet that went with living above a library & we don’t know whats going to happen in future.”

Lambeths failure to communicate properly with affected parties, or to produce a business rationale for closing the library, is simply unacceptable and, with just over three months till the London Council elections, surely won’t be forgotten by local voters.

In spite of this, the council has still committed to give the building to GLL rent-free for four years in a deal uncannily similar to the terms they offered profitable Picturehouse @WestNorwoodPH. http://www.brixtonbuzz.com/2017/12/greenwich-leisure-ltd-will-get-carnegie-library-rent-free-for-four-years-as-lambeth-council-finalises-plans-for-book-ish-gym/ …
and the Trust have *still* not published even a draft business plan, nor secured any funds from sources other than the Council (they planned to raise £5m) and as of October 2017 were “still not on the same page as the Council”. http://carnegiehernehill.org.uk/uncategorized/recent-press/ …

…however that is exactly what happened here. Despite community-backed @CarnegieLibAsso having delivered a fully-costed business plan to save the library, the Council awarded the library to @CarnegieHerneHl, since when their 2 most senior staff have quit http://carnegielibraryassociation.org.uk/

But perhaps even worse than closing a library much-loved by local kids and families is that, almost two years since it shut, no business plan for the ‘bookish gym’ has been released. In the commercial sector, committing £m’s on a project without a business plan is unacceptable…

As Lisa & Matt say, before it closed, “@CarnegieLib saw a large and growing user base, notably among children, as the library had the fastest-growing number of child users in the borough. “There are after all so many reasons why people use real library services”

Lisa adds: “What I’ve noticed is just how wrong the assumption is that people ‘no longer use libraries’. “When the library was opened the footfall in the area of the comings and goings was very high…

“I also think about the people that used the library that had literacy problems and are just getting by. “How will closing a full library service to be replaced by paid for events going to help them?”

Matt adds: “It seems so utterly thoughtless to convert a space designed to carry noise, so as to alert librarians to untoward activity anywhere on the ground floor, to a space for hosting noisy events!”

“The council have shown us no respect. “We’ve heard rumours the main room is going to be some sort of hired space for performance & music events. “If true this is a shocking change in use without any consultations with building users or locals.

Lisa is referring to the fact the @CarnegieHerneHl, the council-nominated body they intend to hand the building over to, have never revealed their plans for the now emptied main library room.