From Defend the Ten: Last August, Defend the 10 sat in at Waterloo library, then the only one of the new-style small-scale barely-staffed ‘neighbourhood libraries’ hailed by the council as great success.

With our observers monitoring the use of Waterloo library for a week, we were able to tell a very different story: http://defendthe10-lambeth.org.uk/2018/04/17/report-on-waterloooasis
Now there are two more, Minet and Carnegie. So, this summer, we went to have a look, repeating our week of observations in each library. We also spent a week at Tate South Lambeth – a staffed, full-service small library. The contrast was telling…
MINET ‘NEIGHBOURHOOD LIBRARY’
Minet library re-opened as a reduced ‘neighbourhood library’ in August 2017. The survey was carried out in mid-June 2018. Observers attended all the hours the library was open, for a week. The library is in a pleasant building with good disabled access and a toilet. The space is shared with the archives service. The library has only two PCs. The stock occupies about half the space it had when this was a full-service library. There is no separate children’s area. There are no newspapers/magazines.
Much of the stock visible is not available – it belongs to the home library service, which was previously housed in the much more spacious Carnegie building. One user, who had come specifically to find a book on computers, remarked on the small selection and left with nothing. Others were seen looking at the shelves and taking nothing.
Most noticeable overall was the lack of library users. Apart from the observer, the maximum attendance at any one time was three people. It was regularly completely empty. Also noticeable was the effect of having the library staffed for only two hours per day. 21 parents with toddlers came to the wriggle & rhyme session on Tuesday, and there was good attendance at the book group (both disturbed other users, because there is no separate space).
When staff left, the space emptied. It was clear that this led to many missed opportunities.

Observers frequently noted people who looked in, but not seeing any staff, left at once. Nobody at any time used the librarian phoneline offered in notices. Library users asked each other for help, e.g. to book a PC. If this was not given, they left. Otherwise there was rarely any conversation between library users.

The team in the archives section repeatedly had to explain that the librarian was not there. They regularly had to interrupt their own work to help people – e.g, to find certain books, to find the audiobooks section, to find and check out a book previously reserved, to log on to a PC, to use the self-service machine.

Other problems when library staff were absent: – in one 4-hour period on Saturday, four people wanted to join the library but were unable to do so; – one boy could not use the self-issue machine, asked where the librarian was, then walked out with his books (the alarm sounded). An adult left with several books without using the machine. – 5 people wanted to use a PC, did not know how and left. – the lack of PCs led to a few incidents when people argued over taking turns – there were extended periods when children were left completely alone, not visible to the archives staff and thus vulnerable to approaches from strangers.
One very young child wandered into the lobby, where the door out to the road is easily opened. When staff were present, they came to run an activity and then immediately left, or spent much of their time tidying up or helping people use the self-issue machine. By lucky chance, a librarian was on duty when a parent and child needed help finding information on the internet, but it was rare to see librarian able do this kind of core librarian work.

Children/young people formed a good proportion of users – or potential users who looked and left. Currently, young users seem confined to after-school children who are confident using the various machines. Parents with pre-school children also show interest. But without staff it is not possible to develop any of the potential the library offers to a deprived community. 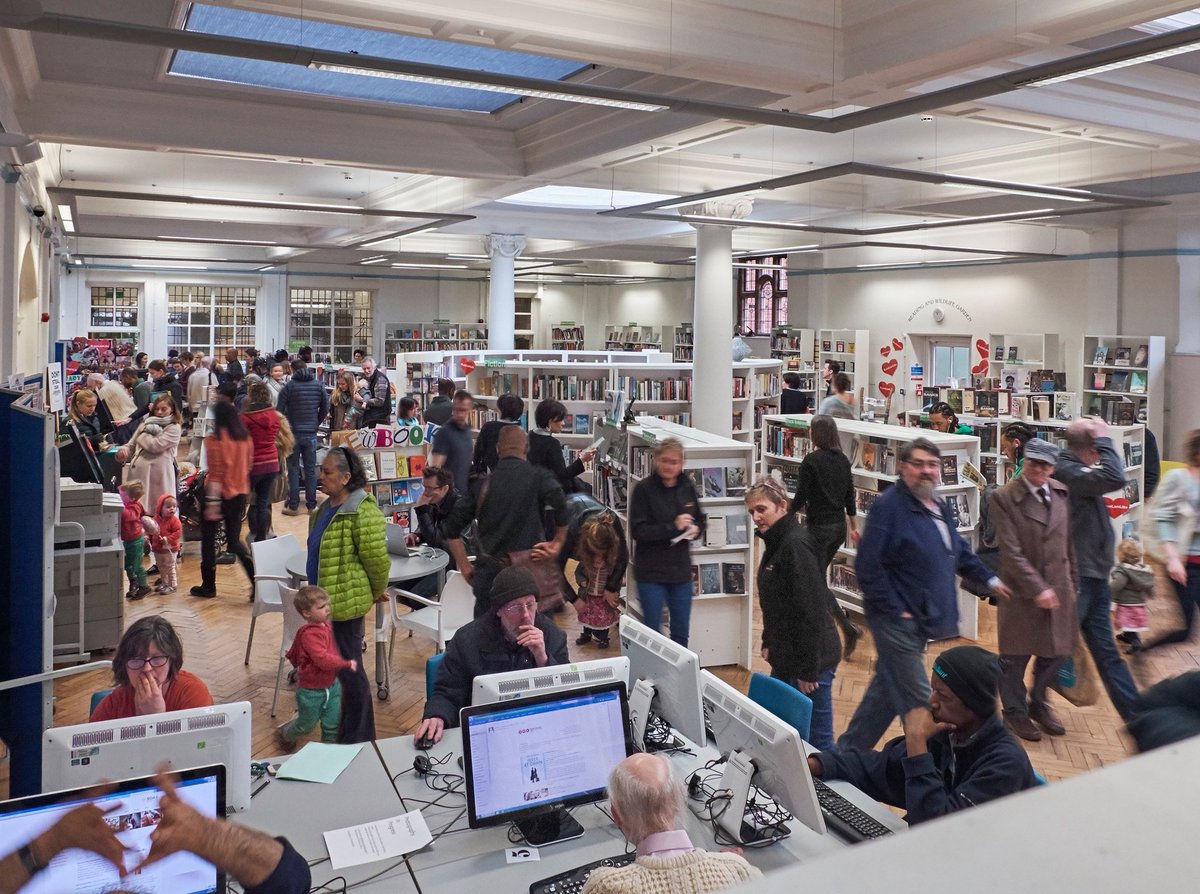 Carnegie library re-opened as a reduced ‘neighbourhood library’ on 15 February 2018. The survey was carried out four-and-a-half months later, during the last week in June. Observers attended all the hours the library was open, for a week. This mirrors the survey carried out in August 2017 at Waterloo ‘neighbourhood library’.
It was difficult to evaluate the library’s function fairly, as it currently shares the space with a building site (the basement excavation) – causing problems that included dust, noise, power lines to the print/photocopying machine being severed, and closure because security staff had not arrived – or the fire alarm was set off with nobody able to stop it (it went on all night).
It was unpleasantly hot because the library garden has gone and the garden door is locked. The library also lacks a kitchen, toilet and disabled access. The latter, and fire safety requirements, mean that £1,500 a week is spent on security guards (two at all times, plus two GLL staff doing GLL work on laptops). These usually matched or outnumbered library users. They were not able to help users though they were frequently asked, beyond occasionally manhandling a pushchair up the steps. No elderly/disabled people or wheelchair users could visit. Usage was poor. The maximum recorded at any one time was 16 (on two occasions).

The typical number was four to six. This contrasts poorly with previous usage, although the library’s re-opening had been heavily publicised to all local households during the May election. It is arguable that usage will improve if all these problems are sorted. However, this phase is currently planned to coincide with a major reduction in the library space (and thus in stock, study space, children’s area etc). There appear to be no plans to replace the kitchen. It is also arguable that the lack of library staff also discourages users. Library staff are on duty only two hours per day. When present, they were mostly occupied on routine work: reshelving books, answering queries, helping people log in to PCs, issuing books when the selfservice machines did not work (or sorting out building site problems). The only activity provided was one parent-and-toddler group. Previously there was an extensive programme of activities. Without staff, these cannot be resumed.

There were no newspapers/magazines, except Daily Mails kindly left by security staff. Quality of book stock was high and very current, with – for instance – the new Trump tell-all by James Comey, and the Stephen King topping that week’s best-seller list. The space currently occupied by the main library is generous (it will soon be very much reduced), but noise from the children’s section in one corner carried all over the room. This disturbed other users, which made parents feel very uncomfortable. The former separate children’s library is closed. The PCs were popular – although users regularly needed help from the librarian (if present). Problems with the self-service machines were also common.

Tate South Lambeth Library is a full-service, properly staffed, small local library. A threat by the council to downgrade it and install a gym was fought off by local opposition. The survey was carried out in the second week of July, during the heatwave. Observers attended all the hours the library was open, for a week. (On Tuesdays when it is closed, the library also holds language learning sessions and a special group for people with impaired vision, coming from all over the borough, using the specialist reading equipment provided the library.)
Observers recorded 937 people using the library, almost equally divided between male and female, with females a little ahead. About one tenth each were pre-school and school-age, three tenths were young adults (18- 30 years), just over a third were adult (31-60 years) and one seventh were seniors. (This survey was within school term time, so the numbers of school age children were lower than in holiday periods.)
All types of activity were registered. Particularly strong numbers were for use of library computers and borrowing/returning books (one fifth each), seeking help from library staff (one sixth of the total) and taking part in a library activity (just over one tenth). Regular activities at the library include a homework club, adult reading group, teen reading group, two English teaching sessions, junior knitting/crochet club, older people’s knitting group, free film club, and evening talks. The survey demonstrated people’s dependence on library staff – by number and by nature.

Observers recorded 153 cases of people seeking help – and always receiving it. Some needed repeated help. The type of help provided was very diverse – answering membership enquiries, setting up or renewing library membership, helping with printing and photocopying, help and guidance on the use of the library’s computers, sorting out a cabling problem on the library’s computers, helping on the book issue machine, searching for books on the library system, providing information on library services and activities, registering children for the Summer Reading Challenge and helping them select books.

Observers commented on the unfailing patience and friendliness of library staff in dealing with users. Particular sensitivity was displayed in talking to a recently bereaved elder. A young woman was allowed access to the desk computer to resolve a problem. Understanding and calm was displayed in dealing with a man furious at his computer. The library, though always very busy, had a warm and relaxed atmosphere. Users greeted the staff as friends, and also talked to each other. All community members were made to feel welcome.

(Lambeth council, where Lib Peck is council leader, have been asked for a comment on the above. We’re not holding our breath. – Ed.)

Your regular reminder that @LambethLabour has given almost no money raised from property developers to libraries in recent years: 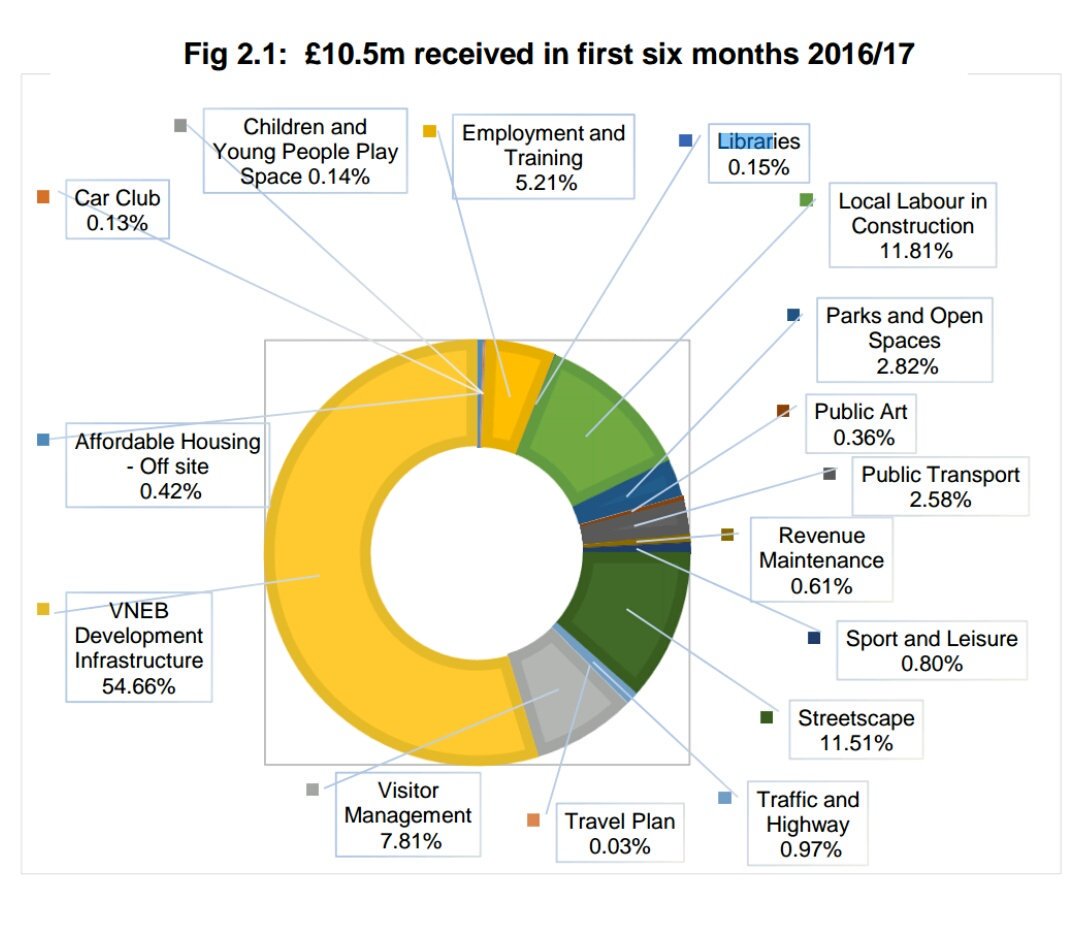